It was just after midday when the fighting was still raging. Aba Thummamah as-Sa'idi approached Hussain (A) and said, "I can see that the enemy is getting very close. By God! I will not let them kill you and I am still alive. I wish to meet Allah, the Exalted after I have said my prayers in your company". Hussain raised his head towards the sky and said, "You remembered prayer! May Allah make you among those who say prayer and invoke Him; indeed, this is the start of (Dhuhr) Noon prayer". "Ask those people to give us a respite until we say our prayer", he added. Al-Hosein (of the enemy camp) said, "It will not be answered". Habib bin Mudhahir replied, "You claimed it will not be accepted from the house of the Messenger. Would it then be accepted from you? Al-Hosein attacked him dealing a sword blow to the head of his horse causing it to rear; he fell of and was rescued by his companions.

Hussain (A) then got ready for prayer - several versions as to how and what sort of prayers was said have been related. One version is that he led what was spared of his followers at that stage of the battle in 'fright prayer'; Zuhair bin Al-Qain and Sa'eed bin Abdullah Al-Hanafi together with half of the followers were in front of him. A second version claims that they said their prayer individually i.e. not in a congregational manner. A third story is that he led them in a quick prayer.

When Sa'eed was badly wounded he fell to the ground and said, "Oh God Almighty! Damn them as you have condemned the people of A'ad and Thamoud; give my regards to Your Prophet and let him know of the pain I am suffering; my aim is to be rewarded by You for defending the progeny of Your Prophet (S.A.W.)". He turned to Hussain and asked, "Have I lived up to my vow?" Hussain replied, "Yes, you are preceding me in entering paradise". He perished. He was found to have received thirteen arrows apart from wounds caused by swords and spears.

When Hussain (A) had finished his prayer he said to his companions, "Oh you noble folk! The gates of paradise are ajar, its rivers are flowing, its fruits are ready to be reaped; its dwellers - the Messenger of Allah and the martyrs who were killed in the way of Allah are waiting to welcome you; they yearn for your company. It is, therefore, incumbent on you to protect the religion of Allah, and His Messenger; drive away the enemy from his family. Their answer was, "Our souls are a protection to yours and our blood for yours; By the Almighty no harm will befall you and members of your kindred as long as we still breathe".

Omar bin Sa'ad ordered Amr bin Sa'eed who was in command of a group of archers to stun the horses of the followers of Hussain (A). The result was that no horseman was spared save Adh-Dhahhaq bin Abdullah Al-Mashriqi. He said the sight of our combatants falling led me to enter my horse in a tent to spare it destruction.

Abu Thamama as-Sa'idi came out and fought valiantly until he was critically wounded. A cousin of his, who had a grudge against him, set upon him and killed him.

Salman bin Mudharib al-Bajli, who is Zuhair bin Al-Qain's cousin, forged ahead fought and got killed.

Handhala bin Sa'eed ash-Shabami shouted "Oh people! I fear for you the like of what befell the (Al-Ahzab) parties, the like of what befell the people of Nuh (Noah), and A'ad and Thamoud, and those who came after them, and Allah does not desire injustice for (His) servants; 0 my people! I fear for you from the day of calling out, the day on which you turn back retreating; there shall be no saviour for you from Allah, and whomsoever Allah causes to en, there is no guide for him. (40:30-93)

O my people! do not kill Hussain "lest Allah should destroy you by a punishment, and he who forges (a lie) indeed fails to attain (his desire)". (20:61)

Hussain rewarded him with a good recompense and said "May Allah's mercy be with you; surely, they will deserve the punishment when they brushed aside your call for them to follow the truth, and rose to shed your blood as well as that of your coreligionists Just imagine how much more would befall them as they killed your good brethren!.

He retorted. "You told the truth, 0 son of the Apostle of God! Is it not then the time to leave for the hereafter? Hussain gave him the permission to join the fray; he saluted Hussain and attacked the enemy and got killed.

Meanwhile, Aabis bin Shabih ash-Shakiri approached Shawthab, the servant of Shakir, who was a trustworthy follower in whose house Shia Muslims used to gather together and talked of the exploits and virtues of Ahl al-Bayt. Aabis said, "What do you like to do?" He replies, "I would like to fight alongside you until I got killed. Aabis wished him well and said to him, step before Hussain so that he can acclaim you as he did with the others who preceded you for that which we can expect reward in the hereafter". Shawthab saluted Hussain and pressed on, fought and got killed.

Aabis drew near Hussain and said, "There remained neither a kindred nor a friend who is dearer to me than you; if I am in a position to avert a diversity from you with any-thing that is more valuable to me than my own life, I would have never hesitated to do so. Peace be with you; I bear witness that I have been on the right guidance of your father and that of yours! He then advanced towards the enemy, sword in hand, and shouting. Since they knew him to be a very brave man, no one stood his ground in the face of his assault. Realising the danger, Omar bin Sa'ad shouted, "Pelt him with stones". As he was overwhelmed by stone throwing, he parted with his coat of arms and headgear and charged the enemy troops who fled. They regrouped and managed to encircle him and kill him. Dispute erupted among the troops each claiming the reward for his killing. Ibn Sa'ad said, "He has not been killed by any of you single-handed". He, therefore, denied them the recompense. 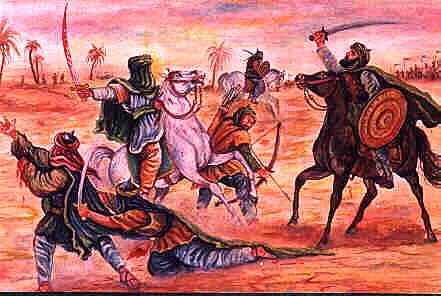 John, the servant of Aba Thar, stood before Hussain asking for permission to fight. He said to him, "0 John! You joined us in quest of welfare; you are therefore, free to part my company". John knelt kissing the Imam's feet and pleading with him "In felicity, I lick your bowls; in adversity I will never let you down! Since my smell is bad, my lineage is humble and my colour is black, I look forward to that day in heaven when you breathe in me making my smell pleasant, my pedigree honourable, and my complexion white. Nay! by God I am not parting with you until this black blood of mine is fused with your blood!" Hussain gave him the permission. He fought valiantly killing twenty five soldiers. He then was killed. Imam Hussain attended his body and said, "0 Lord! Whiten his face and sweeten his smell and gather him (on the Day of Resurrection) with Mohammad and let him be identified with the household of Mohammad". It was related that whomsoever passed by the battlefield smelled the aroma of his body which was more pleasant than musk.

Anas bin Al-Harith bin Nabih Al-Kahili, who was an elderly Companion saw the Apostle, heard his talk, and took part with him in Badr and Hunain battles, sought permission from Hussain, With his turban cloth, he assaulted the enemy troops killing about eighteen before he was killed. When Hussain sow him thus he wept and said,

"May Allah reward you!".

Amr bin Junadah Al-Ansari, a boy of eleven years, whose father was already killed in the battle, approached Hussain for permission to join the fight. Hussain was adamant not to let him do so saying, "This is a boy whose father was killed in the early campaign; his mother may hate to see him killed". The boy said, "My mother ordered me". He gave the permission to fight. No sooner the boy was killed and his severed head was thrown towards Hussain's camp. His mother took the boy's head, wiped the blood from it and hurled it at a nearby man and killed him. She then returned to the camp and fetched a tent pole, or some say a sword, singing war poetry and assaulting the enemy. Imam Hussain returned her to the camp after she had injured two men.

Al-Hajjaj bin Masrouq Al-Ju'fi fought until he was drenched with blood. He returned to Hussain to tell him how happy he was to meet Hussain's grandfather, Apostle of God, and his father the, vicegerent. Hussain replied, "I will soon meet them too". He then returned to the battlefield and got killed.

The Ansaris (Medinese) Sa'ad bin al-Harith and his brother Abul Hutoof heard Hussain's cry for help and the wailing of members of his family. They defected from Ibn Sa'ad army and joined Hussain's band. They fought the enemy and got killed.

Abush-Sha'tha Yazid bin Ziad Al-Kindi, who was on Sa'ad's side did the same by joining Hussain's. He was an archer. He knelt in front of Hussain and shot a hundred arrows. Hussain used to pray for him, "0 Lord! Make his shot hit the target and reward him with paradise". When his arrows ran out he stood up and said, "It seems as though I killed five combatants". He attacked the enemy and killed another nine.

Bidding Hussain farewell, Swaid bin Amr bin Abil Muta' set forth and fought bravely until he was critically wounded. He fell face down. It was thought that he was dead; however when heard that Hussain was killed, he got up brandished a knife, and attacked the enemy; he was then set upon by the thugs and was killed. He was the last of Hussain's companions to be killed before Hussain's martyrdom,

"Died other martyrs, one by one,
All were fearless, coward none.
Plucked were the Prophet's "blooms" in a day
Leaf by leaf-on the sand they lay.
Juveniles, adolescents, young and old,
An army not; seventy-two, all told
I groaned aghast as Hussain I saw,
(His visage stately, with no flaw")