Part 13 - The Killing of Al-Abbas and his Brothers

When Abbas saw the death toll mounting amongst members of his family, he said to his brothers, Abdullah, 0thman and Ja'far, "0 Sons of my mother! Go forth to meet the enemy so that I may bear witness that you kept your covenant with Allah and His Apostle". He turned to Abdullah who was older than Othman and said to him, "Come forward, brother, so that I may witness your killing and thus be considered (by God)". So, they all fought in the presence of their brother, Al-Abbas till they were killed.

Al-Abbas reached the tether of his patience not to follow in the footsteps of his brethren and companions, especially when he could see that "The proof of the Time", Imam Hussain is getting increasingly beleaguered, his supply root cut, the screams of women and the crying of children, who were thirsty, filled his ears. He, therefore, asked his brother to allow him to meet the enemy in combat. Since Abbas was the most valued asset Hussain cherished because the enemy are wary of his attack and fearful of his courage, and the women feel safe and secure so long as they saw the standard hoisted, Imam Hussain did not wish to part company with him and said, "0 Brother! You are the bearer of my flag".

"Hussain placated Abbas, with calm:
Amity's balm seeks; hurt Islam
Restrain your wrath, my brother brave,
A battle, to precipitate, we don't crave,
'Tis prudent, now to peer ahead,
Don't let them act in haste - instead.
Intellect, sound, they have none
Antagonism, to them is a thrilling fun
Nothing is worse than want of zeal
Its lack can a nation's fortune seal
But aimless zeal is folly's trap
In wisdom's fort 'tis a mighty gap
Their show of passion is not zeal
This pseudo-zeal only varlets feel.
Peoples sans vision were destroyed
The prudent, e'er, vision employed
Canting spivs they all are,
Despicable insensates can't look far.
We hope our "passive defence" does work,
A "defence offensive" till last we shirk.
My cool appraisal of this mess,
Is a genuine effort to forestall distress.
The stakes are dreadfully high,
Staggering results it will imply.
Erupt will battle - will get worse,
They crave and yearn for the divine curse.

Abbas replied, "I am sick and tired of these hypocrites, and I want to exact my revenge on them". Hussain ordered him. to ask them for water for the children. Abbas approached the enemy, preached and warned them of the wrath of the Almighty but to no avail! He shouted as high as he could, "0 son of Sa'ad! This is Hussain the son of the daughter of the Prophet. You have killed members of his family and companions."

"All what is left are his womenfolk and children who are thirsty. Quench their thirst with water for they may die of it". He, nevertheless, was pleading with them to let Imam Hussain and what was left of his household to leave Hijaz for the land of the Romans or the Indians. His words found sympathy with some of the crowd so much so that they cried. But ash-Shimr shouted, "0 son of Abu Turab (one of Imam Ali's titles)! Even if the whole of the earth's surface were awash and we were in control, we would have never allowed you access to it, unless you pledge allegiance to Yazid."

Left my bank my honoured guests
Swamped was I by the swarm of pests.
Shorn of the honour; I was robbed
Wept through waves, through swells I sobbed.
Lamented my ripples, my flow did wail,
Inherit I did, thus, a dolorous tale.
Water, my guests were refused, en bloc,
Agonised I was, distraught, with shock.
This torrid zone and simmering land,
None (sans water) could stand
Capture me if not they did
To counter the foe's obnoxious bid
if access to me they didn't attempt
Die of thirst they will, it meant." 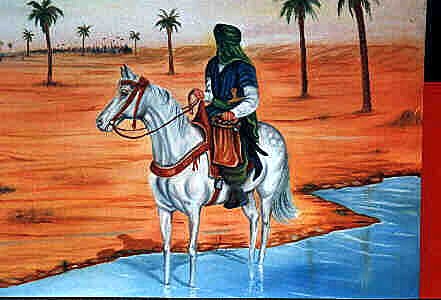 Abbas returned to his brother Hussain to advise him how the enemy were adamant not to give them water. In the meantime, he heard the children crying of thirst. He could not take it any more; his Hashimite ardour left him no room for manoeuver nor more forbearance, He took the skin water container with the intention of bringing water. He was surrounded by some 4,000 troops who shot at him with their arrows. He did not fear their multitudes. The standard hoisted over his head, He started attacking them causing them to flee in front of him. His gallantry used to remind them of his father, Imam Ali who used to annihilate brave and formidable foes in the battlefield. Thus, they did not stand their ground in the face of his determined and ferocious attacks. He managed to reach the waterline of the River Euphrates with fortitude.

He took a handful of water to drink whereupon he remembered the thirst of Imam Hussain and those who were with him. He threw the water away choosing not to drink out of empathy with his kinship.