Part 16 - Imam Hussain in the Battlefield

After he had buried the baby, he met in duel with many a man who never stood a chance of emerging alive. He then charged the enemy troops who did not stand their ground in the face of his attacks.

Thereupon Omar bin Sa'ad yelled at the crowd, "Mind! He is the son of the exterminator of the Arabs. Set upon him from every direction." They rained him with 4,000 arrows. The soldiers cut him off his camp. He shouted, "0 followers of Abi Sufian! If you arc godless and you do not dread the Day of Judgement be free in his world and recall your ancestry if you c]aim to be Arab".

Shimr exclaimed, "What are you saying, son of Fatimah?" Hussain replied, "I am the one who is fighting you, and the women are not at fault. So long as I am alive, forbid your insolent thugs from harassing my inviolable".

Shimr acceded to his request, whereupon the enemy soldiers targeted him. A fierce fighting raged. Since he was very thirsty, he attacked the flank of the army which was sealing off the River Euphrates. He managed to disperse them and make his way to the river. Once he was in the water, he extended his hand to drink. A caller shouted, "Do you enjoy drinking water whilst the integrity of your family is being violated?" He let the water spill from his hands without drinking, and returned to the tents. 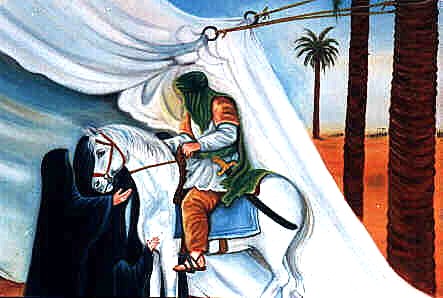 Imam Hussain bade his family farewell for the second time and ordered them to show forbearance saying, "Get ready for affliction, and be reassured that Allah is your protector; He will guard you against the evil of the enemy, turn your mishap into good, chastise your enemy with all sorts of torment, and compensate you for this tragedy with a plethora of bounties and dignity. So do not complain, and do not utter that which may degrade your lofty prestige".

Hussain turned to his daughter Sukaina who was standing aloof, crying and lamenting. He stood by her showing sympathy and solace.

"To lay down life, he forward surged,
Upon the foe, a lion converged.
Bedecked was he by an aureole crown,
Immortal fashioned from entrenched renown.
A conundrum he was indeed,
Signified glory, though heart did bleed
Splendid, dignified, distinguished,
Tormented, distraught, hurt, anguished.
Though with chivalry, to the end, he fought,
The renegades got the prize, sought"
"The job concluded, the camp ransacked,
For final departure, the hoodlums packed.
They called my guests by the 'prisoners' name,
(As prisoners left, as guests who came!)
With 'watery eyes'; and heaving swell,
(Shattered my being) I said, farewell".
A soul searing, sad finale
Woeful 'tis, but a glorious tale.