Part 17 - Surrounded by the enemies of Islam

Omar bin Sa'ad yelled, "Woe unto you! Attack him while he is busy with himself and his family. By the Almighty! Once he is free neither your right nor your left flanks would be more lucky." They swooped on him, raining him with arrows which were so abundant that they lodged in to the tent ropes; some found their way to the women's mantles, startling and causing them to cry and enter the tent; they looked at Hussain in the expectation that he might do something. Imam Hussain attacked the enemy like a roaring lion, No sooner he could engage anyone he left him dead. He received many wounds all over his body mainly as a result of arrows. 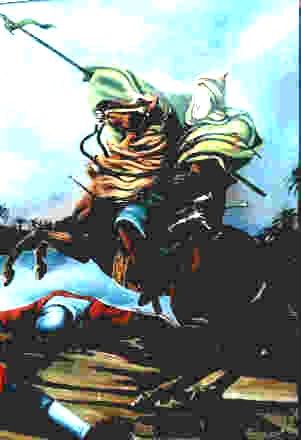 He returned to his position, repeating the saying, "There is neither power nor strength save in God Almighty". He asked for water, Shimr answered, "You are not going to taste it until you enter hell fire!" Another one called him, "0 Hussain! can you not see the waters of the River Euphrates flow, glittering like the belly of a snake? You are not going to drink from it till you die of thirst". Imam Hussain invoked God, "0 Lord! Let him die of thirst". It was then reported that the man used to ask for water, once he drank, the water gushed out of his mouth. He continued thus until he perished of thirst.

Abul Hutoof al-Ju'fai shot Hussain with an arrow which lodged into his forehead, Hussain took it off causing the blood to stream down his face, whereupon he said, "0 Lord! You are witnessing the transgression against me by Your sinful creatures. 0 Lord! Do not let anyone of them get away with it. Kill them all and do not let anyone of them live on the face of the earth. Never forgive them their trespasses."

He shouted, "0 Bunch of evil! Shame on you. What bad guardians of the household of the Prophet you turned out to be. Since there is no man of my band left, you are not going to be deterred from killing anyone after me, for killing me would make it a forgone conclusion. By God! I hope that Allah bestow on me martyrdom, and avenge my death whence you do not expect."

Al-Hosein said, "How is he going to exact revenge on us?" Imam Hussain said, "He will sow enmity amongst you, shed your blood, and pour down punishment upon you, pouring it in abundance".

As he was weakened, he paused to rest. A man hurled him with a stone hitting him on the head causing the blood to stream down his face. He took out a piece of cloth to wipe the blood from his face, whereupon another archer aimed at him with a three-pronged arrow; it lodged into his chest in the area of the heart. He said, "In the name of Allah, by Allah, and following the path of the Apostle of Allah". He then raised his head towards the sky and said, "0 Lord! You know full well that they are killing a man there is not on the face of the earth, a son of the daughter of the Prophet, save him!!".

He pulled out the arrow causing the blood to gush out. He put his band underneath the gaping wound. When it was filled with blood he threw it towards the sky and said, "My only solace is that what has befallen me is in the way of Allah". It was reported that not a single drop of that blood fell down. He filled it again. This time be stained his head, face, and beard with it saying, "I want to meet Allah and my grandfather in this state - splattered with blood".

Since losing blood weakened his body, he sat on the ground hardly lifting his head, whereupon Malik bin an-Nisr approached him, called him names, and hit him with his sword on his head which was covered with a burnoose. The burnoose was drenched with blood. He took of the burnoose, wrapped his turban on the cap and said, "May Allah deprive you of eating with your right hand, and gather you [on the Day of Judgement] with the oppressors".

Hani bin Thubait al-Hadhrami was quoted as saying, "I was one of a group of ten people when Hussain was killed. I was looking to a boy from the household of Hussain, who was wearing a shirt and loin cloth; two rings dangling from his ears, clutching to a shaft; he was distraught turning left and right. A horsemen headed towards him, leaning over the boy and hitting him on the head causing his death". The boy was Mohammed bin Abi Sa'eed bin Aqeel bin Abi Talib. His mother was overwrought by the spectacle of witnessing the killing of her son.

After a short while the enemy troops came back to Hussain who was still in a sitting position for he was overcome by the severity of his wounds. Abdullah bin al-Hassan, an eleven-year-old boy looked towards his uncle only to see him surrounded by the enemy. He rushed towards his uncle after he managed to break free from his aunt, Zainab, When he arrived at the scene near his uncle, Bahr bin Ka'b descended his sword to hit Hussain. The boy yelled at him, "0 son of the bad woman! Are you dealing a blow to my uncle?" He hit the boy who lift his arm to protect his head causing it to be severed. The boy shouted, "0 uncle!" and fell into his uncle's lap. Hussain embraced him and said, "0 nephew! Be patient at what has befallen you and consider it as a blessing for Allah, the Exalted will reunite you with your noble ancestors". He then raised his hands in supplication and said, "0 Lord! If You had granted them enjoyment for a while, cause them to divide among themselves, disperse them into sects following different ways, do not let the rulers be pleased with them for they called on us so that they may be among our partisans, instead they transgressed against and killed us". Harmalah released an arrow towards the boy, whilst he was in his uncle's lap, and slew him.

Imam Hussain, fatally wounded, was left lying for a considerable time. What prevented them from finishing him off sooner was the fact that every tribe was relying on the other to do the job i.e. each tribe hated to be seen as the one which killed Hussain.

Shimr yelled, "Why are you standing idly by? The man is critically wounded. Attack and finish him off".

Hilal bin Nafi' was reported as saying, "I was standing near Hussain as he was on the brink of dying. By God, I never saw a person getting killed with own blood all over his body in a better state than Hussain. His face was exuding with light and awe! I was so overwhelmed by the radiance of his face that I refrained from contemplating killing him! He asked for water; they did not give him any to drink".

The torrent stem, keep him at bay
Hold your own, and win the day.
Hussain observed him, did not move
Beckoning the renegade; to act and prove.
Face to face when Hussain he saw
The foe was overwhelmed, with awe.
Ravished he was by the dazzling scene
Such angelic face had never seen
With celestial sheen his visage bestowed
In propitious lustre glistened, glowed
So intense was the divine hue
His sight could not endure to view.
By the glorious sight he was dazed
But looked on still; gaped and gazed.