Part 18 - Hussain is killed on the Plains of Kerbala

One from amongst the crowd said to him, "You are not going to drink water until you enter hell fire, whereupon you can drink from its boiling water". Imam Hussain replied, "I do not enter hell fire, but enter unto my grandfather, the Apostle of God and stay with him in his own house (in the seat of honour with a most powerful King) and complain to him of that which you have done to me and your transgression against me". All were very furious at his remarks as if Allah did not instil a grain of mercy in their hearts. 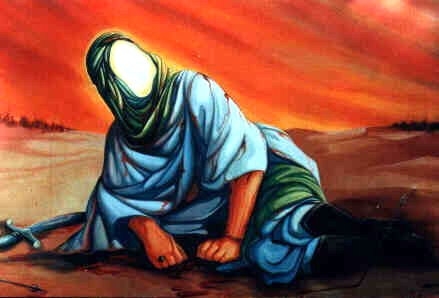 When his condition deteriorated, he raised his eyes towards the sky in supplication and said, "0 Lord! You are mighty in Prowess, the Supreme, the Possessor of every greatness and glory, not in need of the creation, having mastery over everything; Your mercy is high, Truthful in your promise, Giver of bounty and favour; You are close to those who invoke You; encompassing all Your creation; You accept repentance from those who repent, capable of exacting Your will, Having full knowledge of what You are after, Thankful when thanked, remembering when remembered. I invoke You as I am in dire need, ask You as I am poor! I seek refuge in You for I am fearful, weep for I am grieved; I rely on Your succour for I am weak; I put my trust in You alone. 0 Lord! You are the Arbiter between our folk and ourselves for they trespassed against us, let us down, betrayed us, and killed us not with-standing our kinship to Your Prophet whom You chose for delivering the Message and made the repository of revelation. Alleviate our predicament and relieve our suffering for You are the Most Merciful".

"Forbearance with what You have destined is our solace, 0 Lord! There is no god but You. You are the Deliverer of the distressed. I have no God save You. Surely, You are the only Refuge for those who are without one."

Hussain's horse started roaming around Imam Hussain and staining its forehead with his blood, whereupon Ibn Sa'ad yelled saying, "Stop the horse as it is a thoroughbred of the horses of the Apostle of Allah." A company of horsemen surrounded him. He started galloping and kicking with his forelegs killing some men and horses. Ibn Sa'ad ordered the soldiers to leave the horse and to see what it was going to do. When the horse calmed down and felt secure enough, it went back to Hussain's blessed body staining its forehead with his blood, smelling him, and neighing loudly. Imam Abu Ja'far al-Baqir was quoted as saying, "The horse was saying: What an injustice was done to the grandson of the Prophet by his own umma (community)."

His horse, in ecstasy, danced and pranced
by his equestrian, was entranced
A perfect horse, sans any defect
With his head high, and neck erect.
Had tiger's courage, and panther's zeal
His sinews were akin to pure steel
A thoroughbred's, all traits sustained
His sire's blood, in the veins maintained.
By innate courage, he was led
In the thick of battle, had no dread
His prancing steps, and goodly shape
The admiring eyes, with awe, did gape,
His amble faultless, a rhythmic flow,
His steps measured, neither fast nor slow.
His gait, the art of music graced
Was on rhythm, and tempo based.
The aggressor's will, to act, ruptured
He was charmed, dazzled, captured.
A feeble blow, the dastard tired
Hussain parried, with contempt defied
repeated strokes, the renegade rained
Hussain remained placid, calm, restrained
He hurled defiance, and braved it out
Thus paved the way ft)r the dastard's rout.
To keep his ground, stood firm
His superior hold he did confirm.
With lofty demeanour, at a serene pace
Hussain advanced, with chivalrous grace.
Moved ahead, with careless ease
Less to liquidate him, more to tease
The youth, in panic, turned his pack.

The horse, still neighing, then headed towards camp. Once it was there, the women saw the horse stained with blood and its saddle twisted, they came out from their tents spreading their hair! unveiling their faces, beating their cheeks, screaming, seeing their glory vanish, and spontaneously taking to the place where Imam Hussain fell and died, headed by Zainab who was wailing On arriving at the scene, she put her hand under his body raising it to the level of her breast where she left the body to rest. She said, "0 Lord! Accept this sacrifice from US".

In the meantime Omar bin Sa'ad with a group of soldiers were approaching the scene as Imam Hussain was at the point of death. Zainab shouted at him, "Yes Omar! Abu Abdillah is being killed and you are standing watching him perish?!" He turned his face away from her with his tears streaming down his beard. 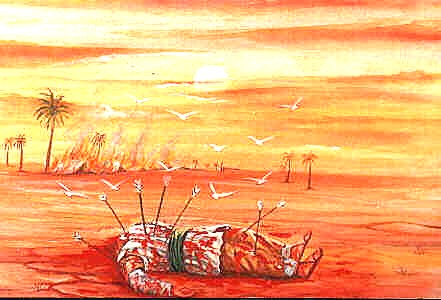 She said, "Woe unto you! Is there not amongst you a Muslim?" Nobody replied! Thereupon Ibn Sa'ad ordered the crowd, "Descend upon him and administer the mercy shots to him". Shimr initiated the attack; he kicked him, sat on his chest, got hold of his blessed beard, dealt 12 sword blows to his body, and finally beheaded him.